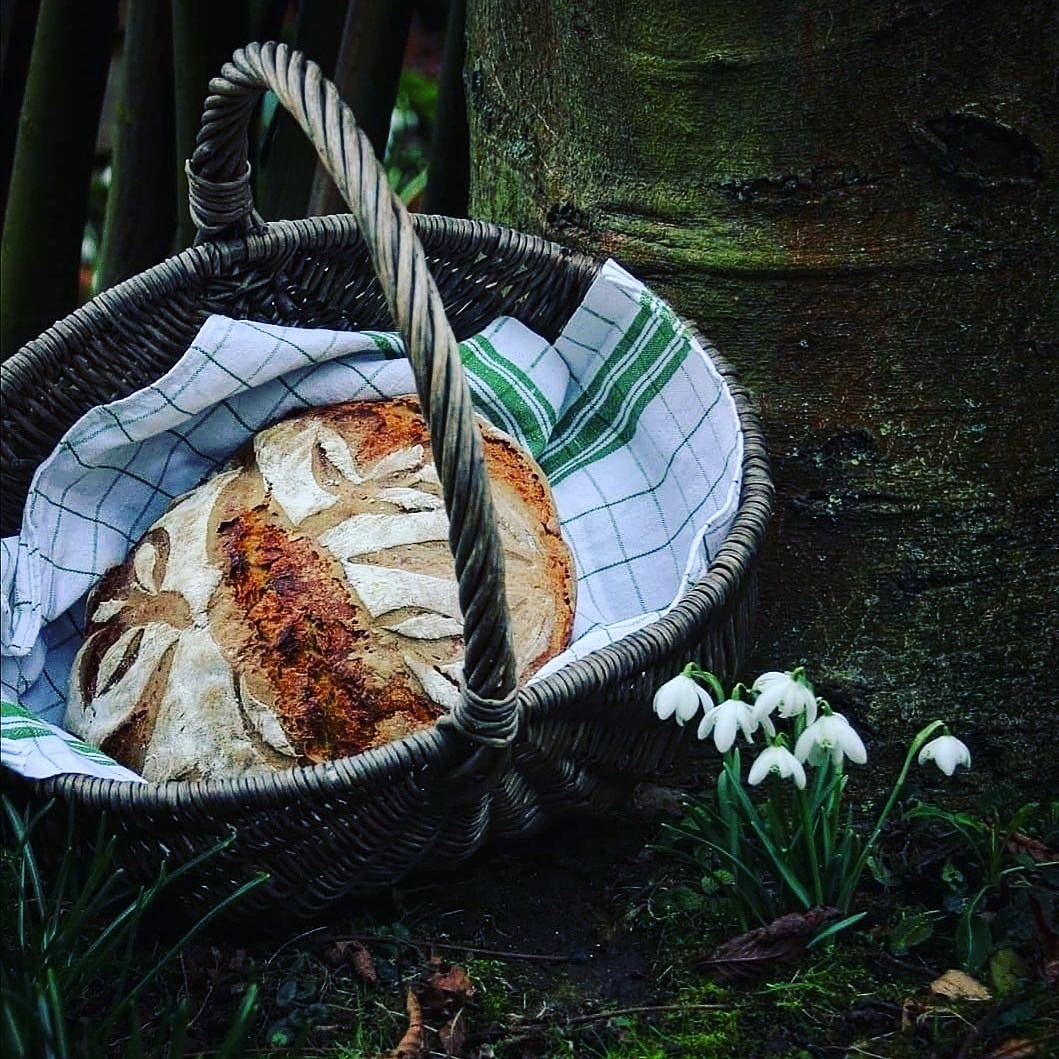 A bread recipe…I can still smell it under my nose. The smell of freshly baked bread mixed with the smell of wood and yeast mixed with hot and humid, love and tradition, simplicity and magic. “Do pane cù criscenti  n’to furnu a ligna dà Nonna ‘Nitta!”  (Grandmother’s bread recipe with sourdough, baked in a wood oven).
Preparing bread was a real ritual.
Grandma ‘Nitta came one day before to sleep at our house and it was already a fight with who of all 4 grandchildren would have shared the large bed in the guest room. The preparation took place the night before with criscenti and everything that would be needed the next day. Criscenti was the mixture of flour and water to which yeast and lactic bacteria are added. This starts the “fermentation” with a small amount of raw bread that is left to sour for a few days.
Wake up call was at 4 in the morning with bets on who would be able to wake up to help Grandma ‘Nitta. We all lost systematically.  It was a thrill to have Grandma ‘Nitta with us!
Each time it was the unmistakable scent of freshly baked bread that woke us up!!!  And everyone rushed down to taste it. We had breakfast with freshly baked “cuddure” seasoned with oil and parsley!  I think this has been and will remain the taste of excellence for my palate!
Grandma’s yeast bread recipe included the usual steps that are part of the ancient art of making bread at home. Which also included a certain preparation of the wood oven.
A few days earlier, Grandma ‘Nitta prepared donuts with the hazelnuts and almonds that we had collected. The skins of this dried fruit together with the “fasceddi di sarmenti” (vine branches) that were set aside during the pruning of the grapes, and some citrus branches, were burned in the stone oven and thus the oven was prepared for  baking bread.  The ash was then used for the must of the mustard (see recipe in the blog).
This ash was placed in the basin (a large ash tray) and here the blankets were heated that would be used for the leavening of the bread.
Grandma ‘Nitta kneaded the bread with the “criscenti” and the flour and water in the “maidda” (rectangular wooden container) where the freshly baked bread was then placed.  The dough was left to rest until full leavening which took place after a few hours.  ‘Nitta used to carve the dough with a knife. When it retracted in an elastic way it meant that the leavening was ready.
Once the dough had risen, it was divided into “cucciddati”, “vasteddi” and “cudduri” (the classic Sicilian forms of bread) carved (cutting the bread is a fundamental step).
These were placed on wooden boards covered with heated blankets and left to rise further.
Meanwhile, the oven freed of the ashes was ready and so the bread was baked with the help of the shovel.
It was then taken out of the oven and consumed up to a week later without altering its flavor and texture.
The stone oven was then used to prepare and bake all the various Sicilian specialties: caponatina, chicken and potatoes, pizza, onions and baked aubergines, and at the end biscuits that needed less heat.
In short, grandma’s recipe for bread with sourdough was a real ritual!

Tradition
Baking is an ancient art, made up of care, dedication and even love.  In the past, when not everyone had an oven available, bread was prepared together, for the same community.  U pani di casa Siciliano is a product that is still cooked today and continues to have the classic flavor of the past.  In order for the result to be optimal, a fundamental ingredient must be used: ‘u criscenti natural yeast.  Even now there are those who keep it as they did in the past, in an earthenware bowl or in a glass jar, put in the fridge so that it does not harden.  In ancient times it was kept wrapped in a fig leaf.  It was customary to lend and exchange criscenti between neighbors: a custom that consolidated and kept neighborhood relations alive, as well as the sense of solidarity of the community.  Natural yeast makes the bread thicker and more compact, unlike brewer’s yeast, which can cause cracks and swelling on the surface of the bread. 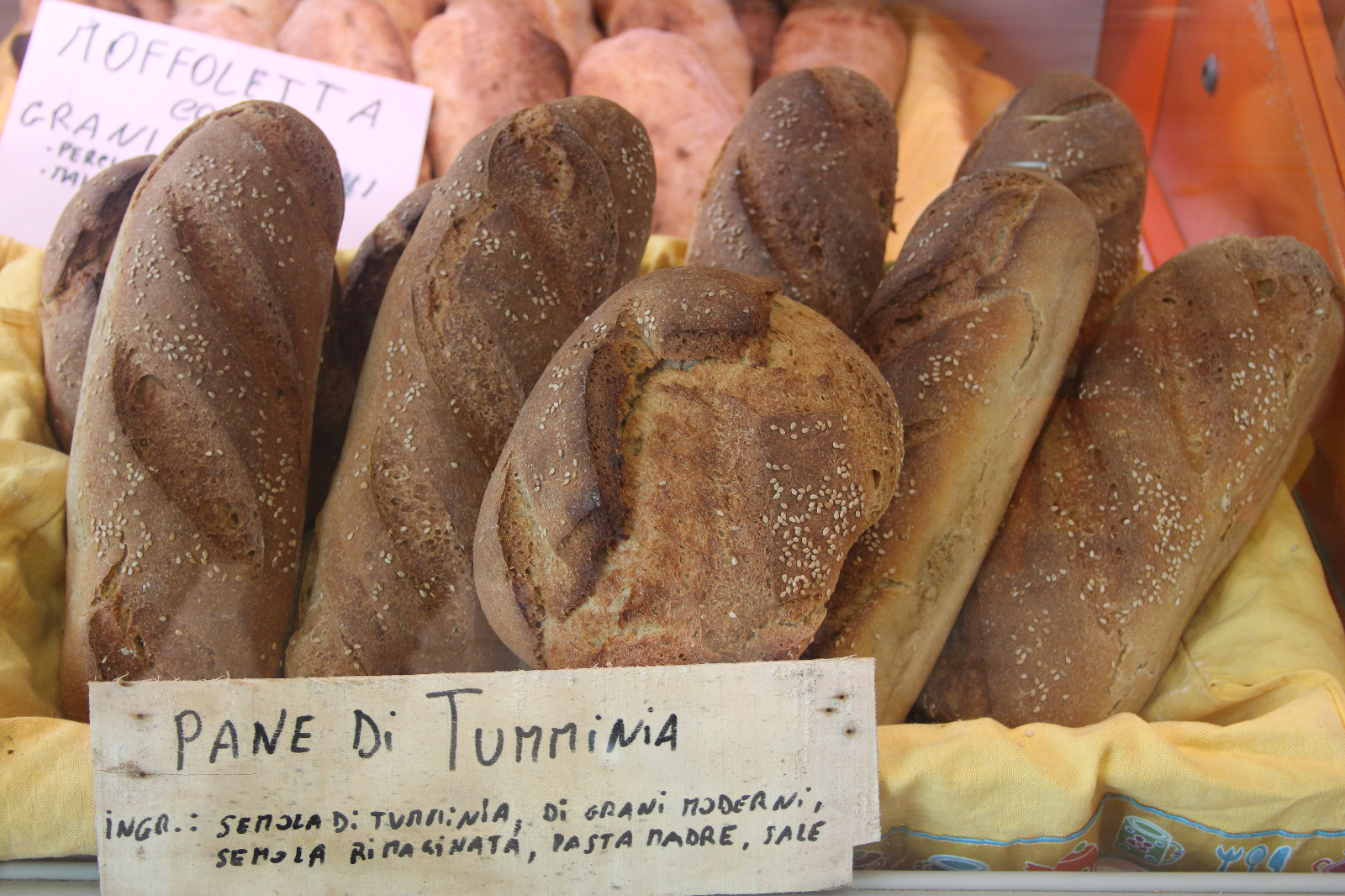 Method
1. Mix all the ingredients well, until you get a small soft and smooth ball.
2. Place the dough in a bowl covered with a damp cloth.
3. Let it rest at room temperature (between 18 and 25 degrees) for 48 hours.
4. After these 48 hours, it will have swollen slightly and the first alveoli will have appeared.

Method
1. To make ‘u criscenti, dissolve the previous mixture in lukewarm water.
2. Once melted well, add the flour.
3. Proceed as before, until you get a new dough to be incorporated into the portion of the first.
4. Carry out the “refresh” operations, cover again and let it rest for another 48 hours.
5. Continue the “refresh” operation for at least one / two weeks, until the dough is able to double its volume in about 4 hours.
6. Store the sourdough in a cool and dry place, wrapped in a kitchen towel and tied, or in the refrigerator in a glass bowl large enough to contain it even for more than a week, between refreshments.
7. If you plan not to use u criscienti for some time, freeze it in the freezer.
8. When re-used, it will first need to be refreshed at least twice.

Method
First, take 100 grams of mother yeast and put it in a large bowl with water, let it rest for 5 minutes so that it hydrates and mix with a wooden spoon.
Add the flour, oil and salt, knead with your hand until you get a dough.
At this point, cover the bread dough with sourdough with plastic wrap and put it to rise for 24 hours, left in the oven off, but it is also fine in the refrigerator.
THE DAY AFTER
The dough will be tripled in volume, put it on a floured work surface and spread it out with your hands to obtain a rectangle.
At this point we need to make the folds: take the longest part of the rectangle and fold it up to the center, take the other side as well and fold it overlapping the other side.
Now fold the shorter part bringing it to the center and do the same thing with the other side overlapping it in a booklet.
And now the pirlatura: that is, you have to round your dough by turning it with floured hands.
When you have obtained a spherical shape, put it in a basket lined with a clean cloth where you have added a sprinkling of flour on the bottom and let your bread with sourdough rise until doubled in volume (it takes about 3/4 hours).
Take back your bread and raise it slowly with the cloth, slide it gently onto a baking sheet with parchment paper sprinkled with flour and put a sprinkling of flour on the surface of the bread as well.
Make incisions with a sharp knife and bake your loaf in a preheated oven.