This time I will share my husband’s memories. He had special grandparents. His grandfather was a very popular ice cream maker in Acireale known as “Donn ‘Angilinu.”

He went around the alleys of the city with his tricycle, preceded by his unmistakable whistle, with crowds of children flocking to taste his delicious ice creams.

My husband’s favorite was “u gilatu co ‘turcu.” Don Angilinu had experimented with the ice cream cone covered with melted chocolate: a delight!

Today the Nivarata prize is named after Don Angilinu. It is an event that takes place in Acireale and ice cream makers compete to be named the best!  It is possible to taste the most varied flavors of granita from the best Acesi and international ice cream parlors.

In Sicily, any self-respecting ice cream or granita must be accompanied by brioche col tuppo: the undisputed queen of Sicilian pastry!

Here we strictly propose the recipe for “Donn’Angilinu u gilataru!” 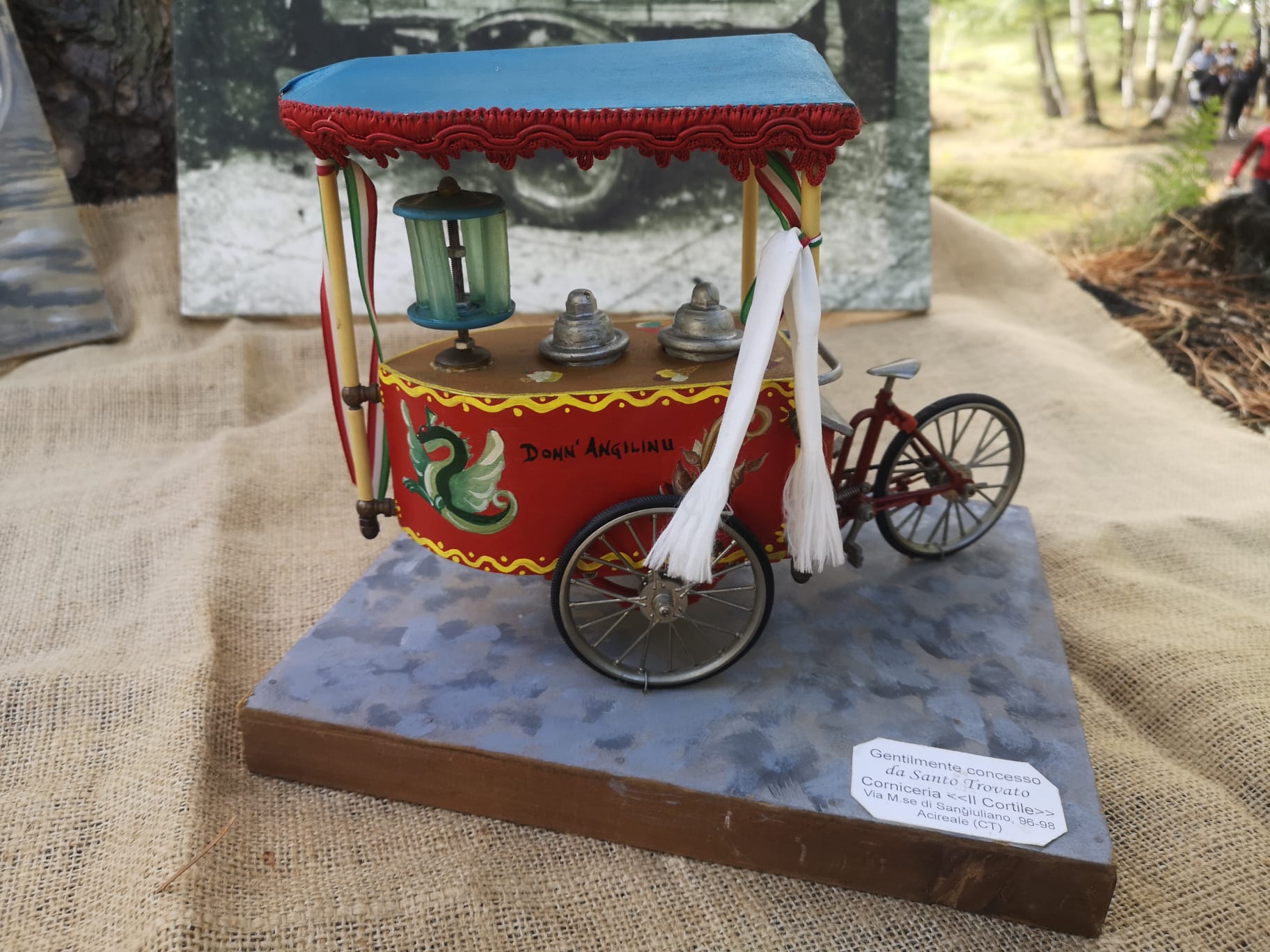 History
The “brioscia col tuppo” has ancient origins and takes its name from its shape that recalls the low chignon that, according to tradition, Sicilian women once wore and in the regional dialect is called “tuppo.”

2 – 4 hours before preparing the Pasta Brioche, put in a bowl: the grated peel of the oranges, that of the lemon, the rum, the vanilla and the honey, carefully turn the mixture and seal with a plastic wrap: leave to marinate for at least 2 hours.
Place the flours, yeast, milk and sugar in the mixer in order.

For a good result of the Brioche Pasta it is necessary that all the ingredients you use are at room temperature.
Operate at low speed, let the ingredients mix for a few seconds and add the eggs 1 at a time.

When the eggs are completely absorbed, put the mixture of aromas into the basket being processed.
At this point, let the mixer work for 8′-10 ‘at low speed.  In this first phase of assembling ingredients, the dough is uneven, crumbled, partly sticky.

Put the soft butter into small pieces in the dough which in the meantime continues to work at a constant low speed.  Finally, add the salt:
Let the dough work and it will be ready when it is perfectly strung: elastic, smooth, swollen, shiny, detached from the sides of the basket.

Compose a ball in your hands, bringing the excess dough down and place it in a dry bowl, cover it with a film that is in contact with it, leaving no gaps and let it rise in the oven for about 2 hours (1st leavening).
Break the leavening and knead quickly for a few seconds on a work surface, without adding flour.

Reassemble the ball, place it back in the bowl, cover it perfectly with the contact film and place it in the fridge for about 8-9 hours.  Leave the Brioche Dough to rise all night for this 2nd leavening.

The next morning you will find a dough that is tripled in volume, swollen and well rested.
After rising in the fridge, let the brioche dough rest at room temperature for at least 20 minutes.  The dough must be soft, greasy, easy to shape and stir with your hands and detachable from the work surface.

Remove 2 pieces of dough from the dough: the base of 75 g and the “tuppo” of 15 g.
Place the base in a baking tray previously lined with parchment paper, make a hole in the center with your finger, creating a deep crater.

Insert the tuppo into the base crater that you have enlarged several times, making the lower cone perfectly match the base crater.
Make the Sicilian Brioches in this way, placing them in a pan at a distance of at least 6 – 7 cm from each other.
Then let them rest for about 2 hours in the oven off with the light on.

At the end of the time indicated, the brioches will have increased in volume, brush them with a mixture of egg yolk and milk and bake in a hot static oven for about 25 minutes at 180.°

Finally, remove from the oven, let it cool and enjoy with ice cream or granita!